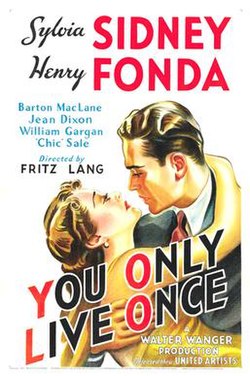 How have I never seen this film?

A noir purist will likely point out You Only Live Once as proceeding the Film Noir cycle of roughly 1940-1959. It is noir maestro Fritz Lang’s second American film, and if anything it is an argument for pushing the beginning of the noir period back to 1937. I know noir, when I see it, and this is clear-cut noir, and a fantastic film.

Henry Fonda plays an ex-con trying to go straight with his new wife (played by Sylvia Sidney…and look at that top billing all the way back in 1937!). Of course, this is noir, so it’s not as easy as saying I’m getting out of the life. Fonda is wrongly accused of a bank heist, and finds himself on death row. There’s a VERY compelling prison escape… that is so noir I can’t even go there and spoil it…watch it and you tell me. The priest? Fuhgeddaboutit.

The film wraps in pure fashion (which surprised me, quite frankly), and did it at about the 80 min. mark.

In closing, I’ll also point out that there is a lot of prison shots, which always makes for wonderful film noir, chiaroscuro visuals. If you’re a fan of the visual-style, you can’t go wrong here.