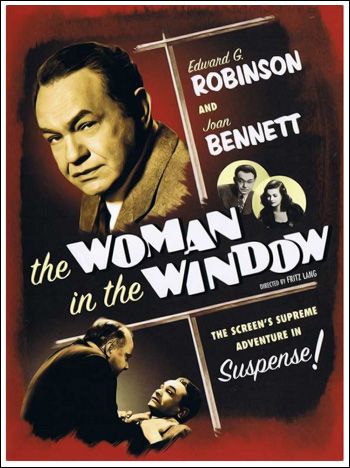 TCM’s Noir Alley is screening the early noir Woman in the Window this weekend. It is well worth your time if you have any interest at all in these films.  It is esteemed noir director Fritz Lang’s (Scarlet Street, The Big Heat) first American film noir. Filmed during noir’s infancy in the US, it almost establishes the template for the genre along with Double Indemnity. Doomed protagonist who can’t seem to right the ship, and things just keep getting worse…mostly because of a seductive woman who suck him into her dangerous web (Femme Fatale). Crime. Chiaroscuro cinematography. Etc.

It also includes three stars of the genre at the top of the billing in the always excellent Edward G. Robinson, Joan Bennet as the Femme, and Dan Duryea.  The three of them would gather with Lang again a year later to film Scarlet Street, Lang’s masterpiece. When I first started exploring these films, I watched Scarlet first, and I almost wish that wasn’t the case. The two films are almost the same story (different characters, same archetypes). In the case of Woman in the Window, Lang chose to change the ending of the original script for fear of drawing the ire of the production code of the time. In my opinion, the ending is Woman’s only flaw.  I don’t know if Scarlet Street had a similar changed ending in its history, but the one it ended up with was significantly more powerful than Woman’s. It was almost as if Fritzie took a mulligan.

If I could go back, I would watch Woman first, wait a week, and watch Scarlet. Less of a letdown for Woman, and fascinating to see how the story evolved. And that is what I’m recommending now, if you haven’t seen these films. If you like film noir (or just old movies), you should see both of them.